“Thoughts that come and go, sometimes uncontrolled, invading the mind and inundating the soul.”

“From behind a virtual screen, Martí uses digital photography, painting and video to construct a scenic space which is boundless, like life itself. Her urgent creativity beats out its own expressive path. In one of her videos, the outline of a man moves through five screens, setting before us the liturgy of his dance. It is a solemn, measured exercise with musical accompaniment, through which Francesca Martí allows us to approach the soul at the heart of everything.”

“MartI’s work emerges from a strong creative and contemporary actuality where the classical borders between different disciplines cross over, fusing to create art that touches our deepest senses. As spectato rs we don’t remain indifferent.” 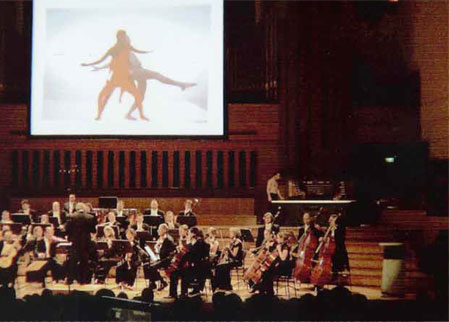 “Martí removes the boundaries between classical music and art, painting live on stage during the concert. She engages you in a confrontation of pictorial music with a musical picture on screen.”

Eric Lonbois, Accenture Belgium from his introduction to the painted performance and video by Francesca Martí and the Orchestra of the LowLands conducted by Walter Proost, Brussels, 2006.