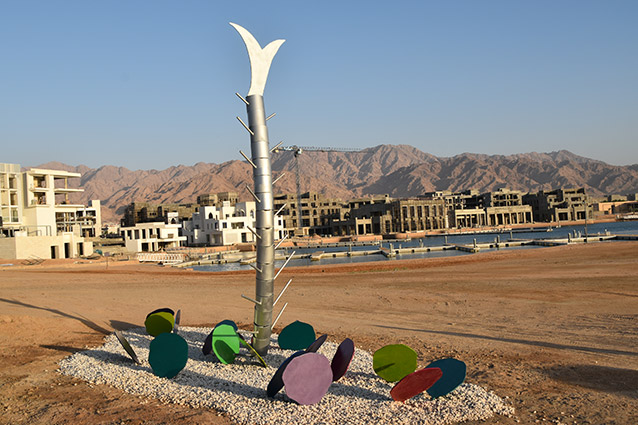 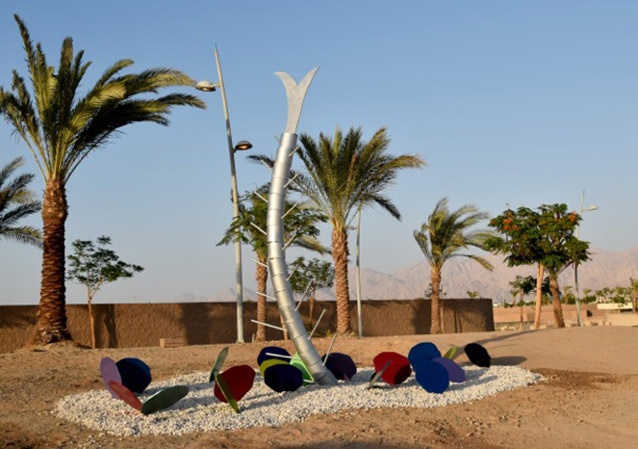 In mid-October, Mallorcan artist Francesca Marti’ took part in the Land Art-Public Art symposium and exhibition in Aqaba, an international event organized by the Jordan National Gallery of Fine Arts, in collaboration with the new Ayla residential complex. Ayla is a fast-growing urban zone and marina in the Gulf of Aqaba, part of the Red Sea. For this permanent exhibition, Marti’ conceived a monumental sculpture in painted iron called Marine Rebirth, installed near the banks of the sea.

«The Marine Rebirth project encourages the viewer to consider the escalating death of marine life around the globe and our increasingly toxic, over-fished oceans, as well as serving as a reminder of much needed environmental restoration,» says Francesca Marti. «This sculpture of a skeletal fish with colourful scales is a symbol, aimed to bring attention to healing our oceans. The rainbow-coloured fish scales anchored in the sand surrounding the skeleton,help to transmit the feelings of new life and energy, movement and rebirth on the shoreline of the Red Sea.»

Aqaba is in a unique geographical position. It finds itself at a politically volatile hotspot, a place with views of four different countries’ depending on which direction you look. The Jordanian deserts of Wadi Rum lie to the east. The urban sprawl of high-rise buildings in the Israeli port city of Elat is only ten minutes over the border to the west. The Taba region in Egypt can be seen not far across the water to the south west, while the mountains of Saudi Arabia emerge from the horizon to the south-east. Marti spent two weeks in Aqaba with local technicians and metal-workers to create her five-metre tall installation of a chrome-painted fish spine standing upright amidst a collection of enlarged fish scales sprayed with brightly coloured automotive paints.

She also recorded a documentary at a workshop which she organized with students from a local Jordanian school and orphanage, together with Khalid Kreiss, director of the Jordan National Gallery of Fine Arts in Amman. At this workshop, the students painted copies of Marti’s fish-scales, adding their own images and texts about the themes of nature and pollution. This was a way to highlight the growing concern young Arabs feel about the state of the Red Sea, not far from their classroom.

Along with sculptural works by her artist colleagues from China, Germany, Egypt, Iraq, Jordan, Mexico, and fellow Spanish artist Rocio Villalonga from Valencia, Marti’s marine monument attracted the attention of Her Royal Highness Princess Wijdan Al-Hashemi (sister to the previous King of Jordan), when she visited the exhibition in Aqaba. Princess Wijdan is also an artist and cultural patron.

The next large project by Francesca Marti’ is Migrant Angel, her solo exhibition of recent video installations, sculptures and photographs produced in her studio near Soller. This exhibition, part of the the 2016 Bienal Miradas de Mujeres, will open on December 1, at the highly-respected Galeria Kreisler in Madrid, which recently celebrated its 50th anniversary. 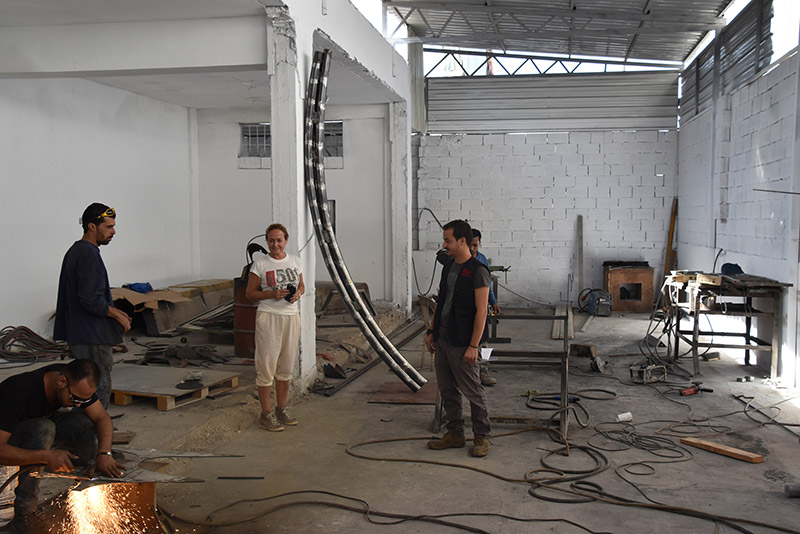 1. Production of the sculpture at the studio-workshop of Bitar Metal Industry and Marine Services Company in Aqaba 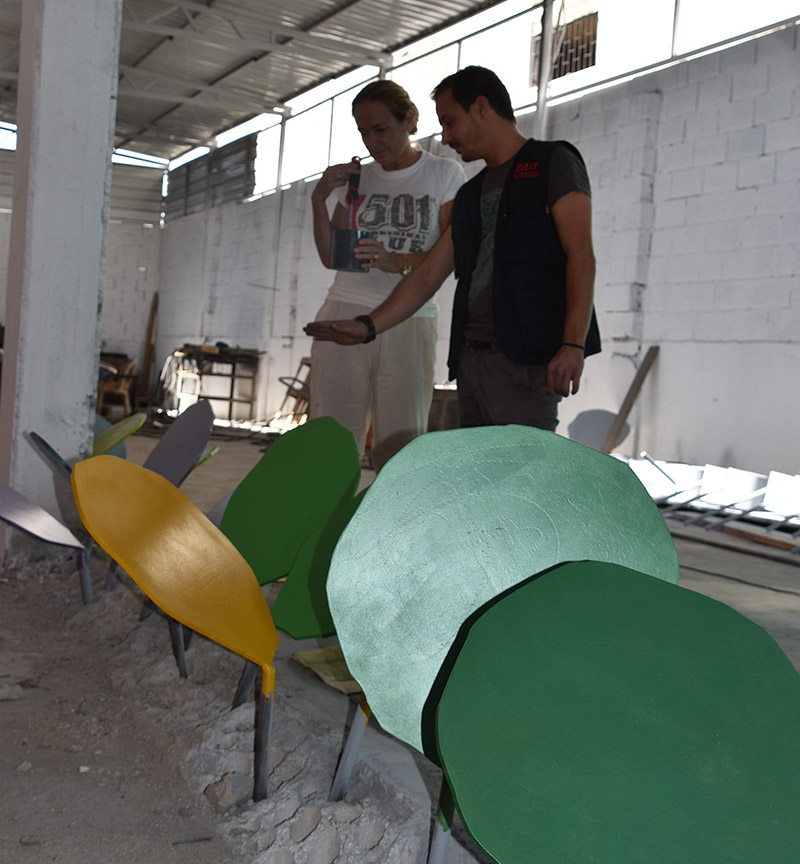 2. Production of the sculpture at the studio-workshop of Bitar Metal Industry and Marine Services Company in Aqaba 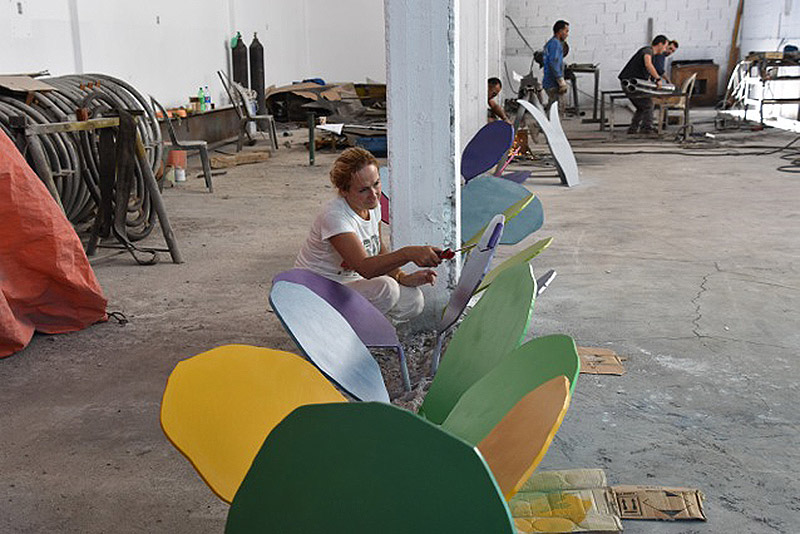 3. Production of the sculpture at the studio-workshop of Bitar Metal Industry and Marine Services Company in Aqaba 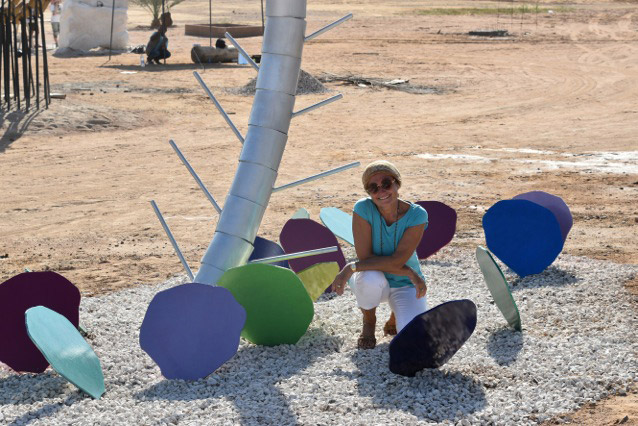 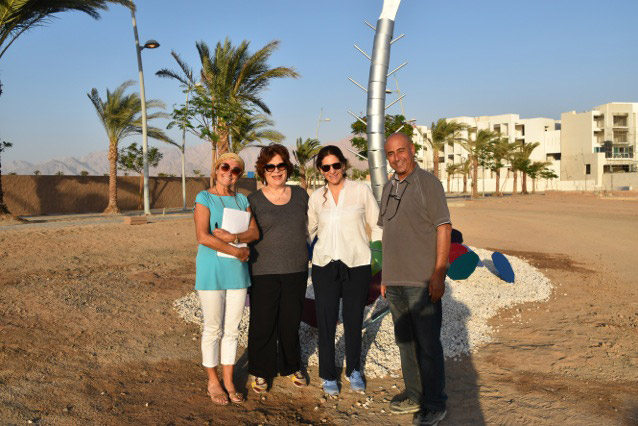 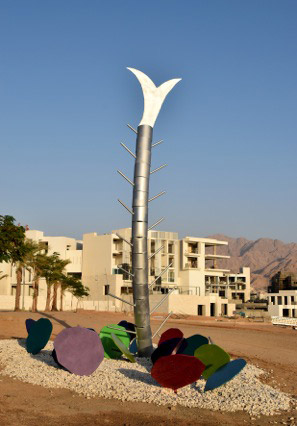