“One day Zuang-zu dreamed that he was a Butterfly. And he flapped around in the sunlight – so easily and free. Then he awoke and had to recognize very physically, that he was simply Zu. But how could he be sure, if he was Zuang-zu who had have a dream about being a butterfly – or if he was a butterfly, just dreaming that he was Zu? But there must be a difference between Zu and the butterfly. That’s what is called the transformation of things.”  Zhuangzi

“A group of friends sitting in the garden. Expressing sounds with their movements and words. Exchanging  nothing but the same ideas. Imitating one another unconsciously. Influencing each other into a white space.

Something draw my attention. Something that followed another rhythm. The free movement of the wings attracted me. The rhythm and its sensitivity. Having the curiosity to go from flower to flower, in a controlled way. The elegancy of the movement. Leaving Footprints of colours in the air.  For a moment I wanted to feel a Butterfly myself.  A butterfly in my thoughts, Thoughts that come and go. Invading my mind and flooding my soul. In my essence of feeling, the butterfly enters and leaves the White Space. A space where nothing happens. Space that comes from the past and goes towards the future. Space with tears and enlightenment. Emptiness. Space where everything finishes and something begins.

Each piece of art needs a white space, between the strokes of the brush.  And thus we are developing growing towards the end of our lives.  To the point where everything fuses till the moments of conception, the love, the life and the death.”

SCREAM, flowing out of White Space and Movements, is a transformation project of intellectual energy, which shapes life. Dreams, ideas, conversations of people and their body language represent flows of energy. They form the invisible structural design of life’s transitions that is made perceptible in this installation.

Movements initiated and links between the terms life, fusion, conception and death become apparent. The resulting networks of terms create contextual links and new meanings which differ from the original linear texts. The Music immediately react to your views and accompany you in an echo of many voices.  A developing movement emphasizes the links between local location and global events.

The visible result of this interactive process is the “THE SCREAM” with passion generated pictures projected onto the canvas.  The transformation of the creature based upon the disintegration and conversion of its original content facilitates a new form. Francesca Marti demonstrates how the meaning of life is generated by distinction and offers a sensuously detectable scope of action that releases a new perspective.

This may be the most enigmatic of Francesca Marti’s works to date. A work full of life but also haunted by a phantasmagorical halo, even though it reaches us from a place that is elemental and germinative by nature.

As her starting point, the artist takes her observation of the birth of an insect from a chrysalis and its efforts to abandon its  protective shell. The subject echoes the nervous movement of the insect in The fly, although on this occasion it is a butterfly, still wrapped in the “veils” of this chrysalis, which offers us a dance/fight of energetic moves. While still enclosed in its cocoon, we feel distanced from this hard-to-distinguish figure. As a life as yet unformed, it poses many questions. This piece stems from performance and through music, evolves into dance. What nature reveals as a cocoon can here adopt the form of a box from which the butterfly/dancer emerges with this liberating dance. This approach is similar to the mystery which Nature shows us in the genesis of life.

The “Scream Project“, which she has worked on intensively since several years, consists of the video installation “Cocoon – Into the Box“, a series of sculptural works that has emerged out of this, as well as various photographs and video projections on painted canvas from the “Scream Crystal“ series.

In her video installations, Martí combines various forms of expression and media – ranging from painting and photography to dance, performance and music – to create intensely associative realms of experience. In her multi-part video installation “Cocoon – Into the Box“, the viewer looks down at black and white video projections in small wooden boxes dispersed across the floor of the gallery. Inside, we find a human figure seemingly in the process of freeing himself from a cocoon. Emerging from his cocoon, the figure stretches and attempts to stand on his own two feet, like a newborn animal or a butterfly immediately after its metamorphosis – full of energy and innocent curiosity for the strange, new world into which it was born. After a while, the figure begins to scream with all its might – both out of joy for being liberated as well as out of fear of the unknown. Yet through the limitations of the boxes (each only 100 x 100 cm), all of his movements and emotions are strictly restricted; his territory is limited. Despite all the passion, a certain order takes control here. The videos depict various intensities of panic, aggression and ecstasy, as well as relaxation and exhaustion, dislocation and grace.

Francesca Martís art is never static – she continues to grow and develop, so that each new work or series of works can be seen as a “work in progress“. Everything flows. Movement is everything. Everything is in motion. With the “Scream Crystal“ series, she combines video, performance, music and painting to create laconic scenes of emotional, spiritual and artistic liberation. A figure is projected onto colorfully painted canvases, painted with great expressive gestures. The figure seems to be trying to break through a tear in the canvas, to free itself and enter the gallery space. The tear in the canvas is reminiscent of a wound. Behind the canvas is an unknown space yet to be discovered; the painted surface of the canvas, on the other hand, serves as a surface for the visible, the concrete, the known. “Scream Crystal“ addresses age-old human themes of life and death. We are dealing here with an artistic attempt to reunite contradictions of all kinds. For Martí does not allow herself to be limited by one single medium, by one single style. Her works are thus not only multi-media, but also and especially inter-medial.

Marti is currently preparing the project SCREAM-2015 with: 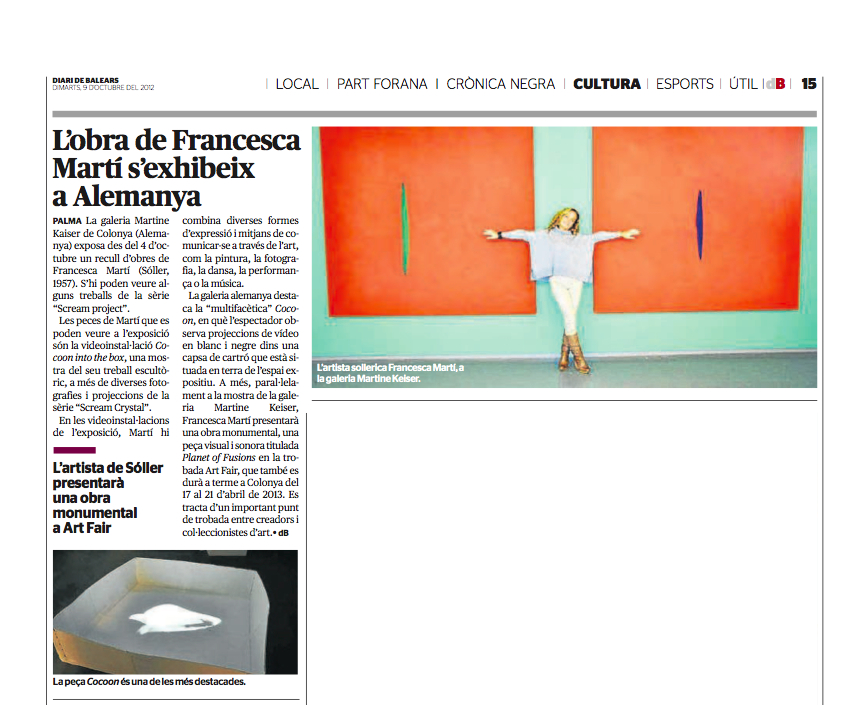 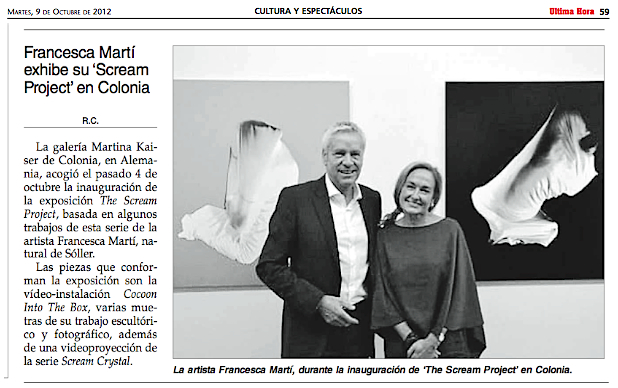